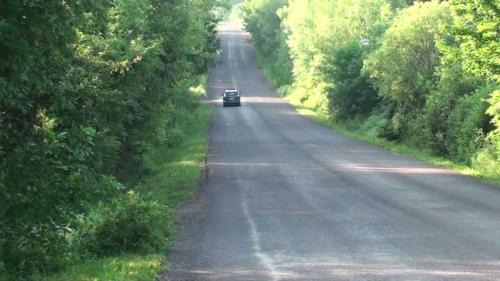 The Magnetic Hill is actually a gravity hill; it is an optical illusion that is created by the ascending and descending terrain. It is situated in the magnetic hill area of Moncton in the Canadian Province. The area is based at the base of a hill in Canada named Lutes Mountain.

Can you imagine water flowing uphill against gravity? Seems impossible but under one circumstance it is quite possible. It is indeed thrilling to experience this extraordinary happening. If you drive to the bottom of this famous hill and take your foot off the brake, your car will start rolling uphill, completely against the laws of gravity. Several people do not believe it unless they experience it for themselves. Observers have also noticed that water in the adjoining drainage ditches also apparently run "uphill." Similarly, if you park a car at the foot of this hill, and put it on neutral, the car apparently starts to roll (entirely unaided!) uphill.

Scientifically speaking this is due to the magnetic attraction or an optical illusion. A Japanese scientist, Kokichi Sugihara of the Meiji Institute for Advanced Study of Mathematical Sciences in an international competition showed how substances can appear to roll uphill as if they are being pulled by a magnetic attraction.

On the other hand, several people believe it to be a supernatural phenomenon. They are of the belief that the hill possesses certain supernatural powers and it transports the worthy souls to heaven. It is an illusion that has been attracting tourists to the southeastern New Brunswick city since the 1930s.

How was this place discovered?

In the early 19th century, exploring new routes, a cart path was built starting from the city onto the ridge. The path was then extended during the early 20th century while extending the road, it was discovered that at one point near the bottom of the ridge, towards the south, motorists had to accelerate, to prevent rolling backwards. And since then this place has been known as a magnetic hill. It was a very unusual phenomenon and in the early years, people were scared to travel through this path. But soon it became a spot of attraction as more and more people began to explore this place and try to see what happens.

And after the Second World War, the local highway was constructed and a "Mountain Road" bypass was built west from Magnetic Hill and this approximately 1 kilometre stretch of gravel road became Moncton’s prime tourist attractions. Magnetic Hill is now a historic property.

If you wish to experience this amazing phenomenon it will cost you 6$ and you can for yourself see what happens on the ride.