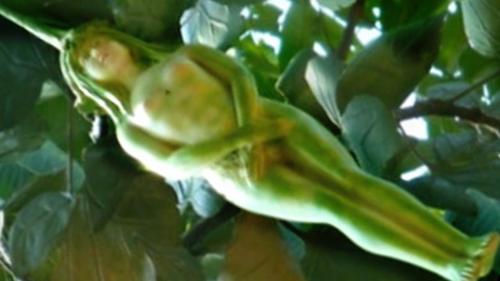 10 Strange Trees around the World

Native to the Philippines, this tree boasts an almost psychedelic exterior thanks to its multi-coloured layers of bark. The irregular pattern of which it shades its bark means that the different stages and colours of its exposure are on display from green – blue – purple – orange and then finally to brown. Despite its aesthetic appeal, the tree is cultivated for paper manufactures and not for decorative purposes.

You must have seen that every tree grows upright, and some can be slightly bent. However, the El Arbol se la Sabina is completely different and weird. This tree is found growing in the direction of the wind and hence it is known to change its shape many a time during the year. It’s amazing, wonderful as well as tree.

This mysterious tree is the only major tree for miles in its area of Bahrain and it’s believed to be 400 years old. The Tree of Life has one of the deepest roots systems in the world of trees and draws in 50,000 tourists annually.

This tree in the Bourgoyen-Ossemeersen nature reserve near Ghent in Belgium has knotholes that make it resemble Edvard Munch's 1893 painting The Scream.

The World’s largest living tree, General Sherman is a sequoia tree. It is located in the Giant Forest of Sequoia Nation Forest in Tulare Country of California. The General Sherman tree is 275 feet tall and is more than 36 feet in diameter at the base. That’s not all, it keeps on growing. Every year it grows 60 feet more. The tree has been named after William Tecumseh Sherman who was the General in American Civil War. Tourist can visit the Sequoia National Forest to see the magnificent creation. It is also home to the Washington Tree, which was once the second largest tree until burnt by a lightning stroke.

The Chapel Tree is an ancient oak tree in France. It's estimated to be between 800 - 1200 years old, which means it was alive during Louis IX reign! It stands about 49 feet high and has a circumference of approximately 52 feet. When it was almost 500 years old, it was struck by lightning.

The fire created by the lightning slowly burned through the trunk of the tree, hollowing it out. The village priest believed that the lightning strike and subsequent hollowing of the trunk was a holy event. So, the villagers built a chapel inside of the tree in honour of the Virgin Mary. Another chapel was built higher up in the tree many years later. Mass is still held in the tree chapel two times a year.

Madagascar in Africa was once a dense forest. But the absolute madness of developing civilisation uprooted the entire land, just leaving behind the Baobabs. The Avenue of the Baobabs is a group of ancient Baobabs trees that stand tall on either side of the muddy road between Morondava and Belo Tsiribihina. The trees grow up to 30 metres tall, with a circumference of 50 metres around and diameter of 11 metres. The best time to visit this place is during sunset. It seems as if the roots like canopies are touching the red sky.

This is a famous tree of Oaxaca, Mexico and is found present on the grounds of the Santa Maria De Tule town centre. The strangest and the most noticeable thing about this tree is its trunk, which is believed to be the stoutest ones in the world. Though the age of this tree is not exactly known but is thought to be anywhere between 1200 and 3000 years old.

Located in the Seam Ream Province, Cambodia, these silk-cotton trees have a few amazing features. The places where these trees are found growing have been untouched hundreds of years and now it is named the Angkor Archaeological Park. The trunks of this tree go upwards towards the sky and create a canopy and their countless roots stay coiled on the land. It’s one of the most amazing as well as strangest trees in the world.