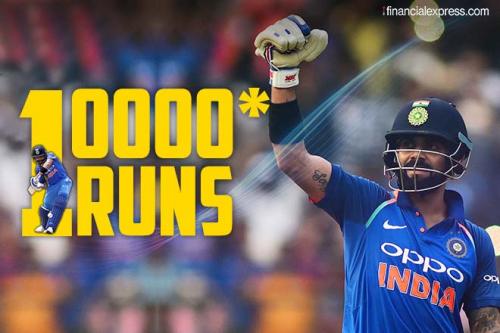 Virat Kohli becomes the fastest cricketer in the world to Score 10,000 ODI runs

On Wednesday, Virat Kohli became the 13th batsman to reach 10,000 ODI runs and the fifth Indian to have reached this pinnacle. He hit another ODI century in Vishakapatnam against West Indies.  He has already proved his mettle when he obtained a remarkable record of hitting 36 other hundreds in 204 innings.

But even after Kohli made an excellent score of 157 out of a total of 321 for six, the match against West Indies resulted in a tie. India cumulatively scored 321 for six before the West Indies, requiring 14 runs in the final over at five wickets, the score when Shai Hope (123 not out) cut Umesh Yadav for a boundary.

Kohli reached 10,000 ODI runs after he scored 81 in the first innings if the match and this made him amongst the best of the best. He is the first cricketer to compile this remarkable target so much faster than any other cricketer. He scored these 10000 runs even faster than Sachin Tendulkar.  Kohli surely plays the game for the score that beats his rivals but he doesn’t care about figures and numbers that add to his legacy. It is his passion for the game that has brought him where he stands today amongst and as the most renowned cricketers of Indian cricket team like Sachin Tendulkar, Sourav Ganguly, Rahul Dravid and MS Dhoni who have scored 10,000 runs in ODI before him.

If we look at the graphs he is the fastest player to have reached here in just 205 innings. Sachin Tendulkar took 259 innings, while Ganguly at 263 and Ricky Ponting took 266 innings to reach their 10,000.  Kohli outshines them all in terms of both speed and average which is just over 59 and his strike rate (92).

Kohli made an exhilarating 10K and is only 8,350 runs behind Sachin Tendulkar in ODI cricket.   years ago, Tendulkar, after scoring his 100th international century, remarked that he would love to see an Indian, someone like Kohli or Rohit Sharma breaking his records.

Kohli reached his 10K when he played Ashley Nurse for a single in the 37th over of the second ODI against the West Indies. Dr YSR ACA-VDCA Cricket Stadium seems a lucky place for Kohli. He has some amazing scores of 118, 117, 99 and 65 in the past.

Kohli is inevitable across formats this year and has scored over 900 runs in ODIs alone. He is at present the world's No.1 batsman in both the Test and one-day formats.

With his inspiring and unbeatable performances, he has won several awards and recognition, including the Arjuna, ICC World Cricketer of the year and multiple BCCI international Cricketer of the Year awards.

BCCI acting president C K Khanna appreciating and congratulating the young cricketer said that "It's an incredible achievement by Virat to complete 10,000 runs in ODIs before he is even 30 years old. It's only expected that Virat will reach many more batting milestones in future,"

Kohli is all set to take huge leaps and grow at this remarkable pace.