Bringing his second film as part of the Badhaai Ho franchise, Harshavardhan Kulkarni's Badhaai Do is ready to tickle our bones. Starring Bhumi Pednekar and Rajkumar Rao, the trailer for the film was released today. Taking a leaf from the original film, Badhaai Do is also a social comedy and a family drama. In the movie, we will see Rajkumar in the role of a policeman. Bhumi will take on the role of PT teacher.

Announcing the release of the trailer, Bhumi and Rajkumar wrote, "It's one of those movies that crossed our paths and touched our hearts in ways we can't explain. Some journeys are meant to be remembered forever. Ab aap dekho trailer aur hume #BadhaaiDo".

The Badhaai Do trailer revolves around the marriage between Rajkummar and Bhumi, only to discover that there are many secrets between these two to reveal. Contracting a marriage of convenience and living as roommates is what gives rise to humorous situations between the spouses, making this couple the perfect entertainment for the family. Not only does it have a lot of comedy and emotions, but this family drama also deals with a socially relevant topic, which we can glimpse in the trailer. 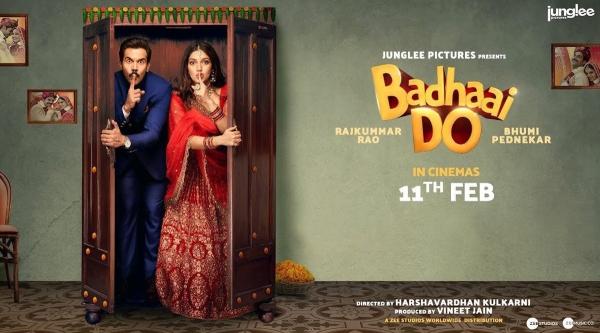 Reports exclusively revealed on Monday that Badhaai Do will be skipping the OTT route and heading towards a theatrical release. Produced by Junglee Pictures, Badhaai Do will open in theaters on February 11.

"The makers of the movie are clear about bringing this movie to the big screen. Several test shows have been held in the past few months, and the response from target groups has been positive. After Badhaai Ho, it's time for Badhaai Do and the team decided to bring the film to the big screen on February 11.”

The film will contrast with director Deepika Padukone's Gehraiyaan, which will premiere on Amazon Prime Video on the same day.

andrew garfield talks about his spider-man: no way home cameo.

mouni roy has all the reasons on cloud 9 today. after all, she married suraj nambiar at a big wedding in goa after dating for a while.