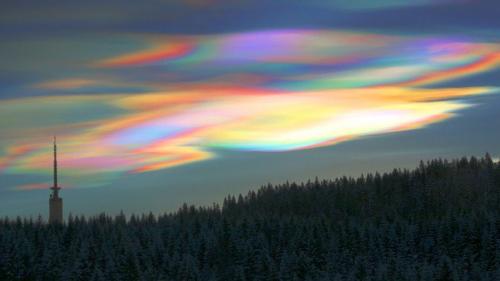 10 Mysterious Natural Phenomena around the World

Despite hundreds of cases of human bodies (alive as well as recently deceased) catching fire without an apparent external source of ignition, spontaneous human combustion has not adequately been explained past the point of conjecture.

During the cold everyone feared the destruction from the nuclear weapons. Because everybody knew the power of the atom bomb, as we had already seen the destruction that was caused to Hiroshima and Nagasaki. At that time people expected to fall from the sky to the land and flatten everything around them. But people in 1908 probably did not expect it at all.

Tunguska event took place on 30th June, near Podkamenaya Tunguska River in Siberia. A large came towards the ground and exploded 6 kilometres above the Earth’s surface. The sound and shock wave knocked people off their feet and broke glasses hundreds and thousands of kilometres away.

Scientists believe that it was an asteroid or a meteor. They also said that it could be made up of ice that is why there is no substance of such a thing was available. But it is impossible to prove it.

This rare meteorological phenomenon lines the sky with one or more striking, unbroken cloud lines that can stretch up to 1000 kilometres in length. It is occasionally observed in different locations around the world such as Berlin, the Arabian Sea, and the English Channel and in Northern Australia. Scientists have not been able to tell the plausible causes for it.

In North America, there is a creature that reportedly is a wild man figure beast. It is hairy, creature that walks on two legs and leaves behind big footprints. People claim that they have seen the creature across North America. There has never been any report of killings. There has been no hard evidence like teeth or bones. There is only eyewitness sightings, blurred photos and documentaries about their past.

Since we cannot prove this universe wrong. Science will also never be able to prove that creatures like this don’t exist.

In October 2015, a couple of online blogs and sites started talking about an image of a floating city over Foshan City in China’s Guangdong Province. The image appeared for only a few minutes and was reportedly witnessed by hundreds. A similar experience also occurred in Jiangxi after a few days. Later in March 2016, people witnessed a stunning view of a group of buildings above the sea by the port of Dalian in China’s Liaoning Province. The residents who viewed the “floating” buildings stated that the whole scene looked like a fairy city floating on the sea.

Many experts suggest that these images could be a Fata Morgana — an atmospheric mirage. A Fata Morgana occurs when cold dense air near the ground is covered with a layer of warmer air on the top. It’s essentially an inversion of temperature, as it is the exact opposite of what naturally happens in the atmosphere. The science behind the formation of these images is that the inverse layering of air temperatures bends the light rays as they pass from one air mass to another and creates the appearance of objects being higher than they really are.

Harvard University theorist Lisa Randall believes that extra dimensions could exist close to our dimension. Based on her theory, we can surmise that different time-spaces exist right where we are, and due to imbalances or rifts in cosmic planes, the dimensions could open up and we’d be able to see scenes from that dimension.

According to folklore, this gelatinous substance is deposited on Earth during meteor showers. It was first reported as early as the 14th century. Some also believe it to be of paranormal origin, calling it ‘cellular organic matter’. This substance is even thought to have inspired the 1958 film The Blob!

Whilst there is much confusion and uncertainty regarding this substance, the Star Jelly I found no doubt originated from the glands in the oviducts of frogs and toads. In this case, a Buzzard had eaten the majority of the but discarded the oviducts, the contents of which swelled to produce the jelly-like material.

This assortment of over 300 perfect spheres of stone was found in Costa Rica and the giant stones are the best-known sculptures of the Isthmo-Colombian area. The excavation these stones could date as far back as the Chiriquí Period (800–1550 AD), but their exact significance still remains a mystery.

While it's been explained as a mismatch between sensory input and memory-recalling output, the randomness of déjà vu occurrences among non-epileptic subjects has made this phenomenon significantly harder to study. Our understanding of this sensation can be anything from the theorised electrical disturbance in the neural circuit to a fantasised glitch in the matrix.

The Hum is a phenomenon involving widespread reports of a persistent and invasive low-frequency humming, rumbling, or droning noise not audible to all people. Hums have been widely reported by national media in the UK and the United States.

The source of Taos hum is still a mystery. Ufos, paranormal activities and many other reasons are being given by different sets of people.

A patch of the desert in Bolson de Mapimi, Mexico has been the site of peculiar radio wave occurrences. Said to have been the base for a test missile launch in 1970, the area is inexplicably sealed off from all radio, TV, shortwave, microwave, or satellite signals.