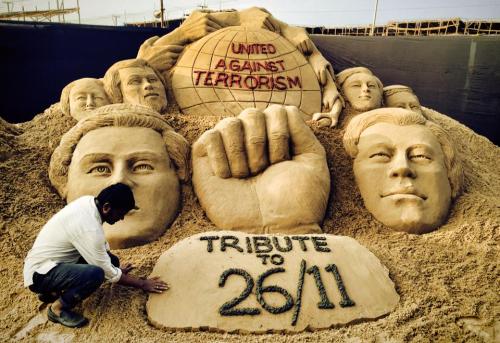 November 26, is considered as one of the darkest in the History of India. With so many advanced both technologically and in the surveillance techniques it is difficult to understand how this dark day came into existence. Understanding the happenings of the event we shall understand the flow of the happenings on the day. On 23rd 2008, ten Lashkar-e-Taiba (LeT) terrorists, trained by Pakistani spy agency ISI, began their deadly journey from Karachi through sea route. They entered India three days after on November 26, after killing an Indian fisherman and capturing his ship.

Once they reached Mumbai they activated their telephones and were constantly instructed by their ISI heads as to what shall be the course of actions. They targeted several high-profile places including Chhatrapati Shivaji Maharaj Terminus, Taj Hotel at the Gateway of India, Cafe Leopold, Chabad House, Rang Bhavan Lane near Cama Hospital and St Xavier's College where many were killed at the hands of these terrorists.

More than 160 people including 18 police officers and two NSG commandoes were killed during this massacre. 310 people were injured during the struggle for survival while the rescue operation continued for about 60 hours.

As per the Maharashtra government they spent around 53.5 Crore on Ajmal Kasab in jail. The government around 43 Crore on the special security at Arthur Jail, expenses on judicial officers, security of lawyers and judges involved in the case and special public prosecutor.

An additional Rs 8 crores were spent on a cell for Kasab. It was reported that even if a truck filled with explosives bombarded the cell, the cell would still be secure.

Rs. 1.5 Crore were spent on a ward that was constructed at the J J hospital where Kasab was kept and Rs 1 Crore spent on infrastructure and vehicles.

The cost of security around the jail was Rs3.5 Lakh per day. The costs of his food and medicines had to be further added.

What did Kasab say in his statement?

Judge M.L  Tahiliyani was the prosecuting judge over the case and the statements of Kasab were recorded by him. As per the Kasab repeatedly said that he had no involvement in the 26/11 attacks and was captured by the Mumbai police 20 days before the 26/11 attacks from the Juhu Chopati. He agreed to belong to village in Pakistan's Punjab but he claimed to have come to Mumbai in search of work in movies.

Kasab denied about his recorded statements by the magistrate and said those statements were recorded wrongly or under pressure.

The lawyer fighting the case for Kasab was K.B Pawar and that one the other end was Ejaz Naqvi,

In the earlier statement given just after the Kasab told that Lashkar-e-Toiba’s chief of anti-India operations Zaki-ur-Rehman Lakhvi was the most important person in the LeT and the mastermind behind the operations in Mumbai.

Kasab said that while he was at a training camp held at Baitul Mujahideen in Muzzafarabad in May, June and July 2008, he saw Hafiz Saeed and Lakhvi once hug a man who was introduced to him later as ‘Major General Saheb’.

In September 2008, after his training he was taken back to Baitul Mujahideen, where Hafiz Saeed and Lakhvi allegedly asked them about the marine training, Kasab stated. He added that after three days, Saeed and Lakhvi sent six recruits – Abu Dajana, Abu Hamza, Abu Al Qasam, Abu Abdullah, Abu Umer Kaala and Abu Zuber – to Kashmir to carry out a fidayeen attack.

Kasab added that around 10 days later, Saeed, Lakhvi, Muzammil, Abu Al Qama, Abu Hamza, Abu Kahfa and Abu Umar Saaed called Kasab and the other recruits to the Baitul Mujahideen office, where Lakhvi told “Hindustan ki Bambai , Bambai par . sab training li . Hum Bambai par .” (India’s financial wealth comes from Mumbai, that’s why we have to attack Mumbai. All you have been trained well on the sea route. We will attack Mumbai from the sea.)

In 2012 Kasab was hanged at the Yerawada jail in Pune.