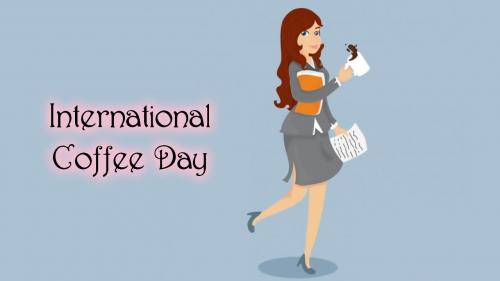 It is also believed that coffee was first promoted at an event in Japan in 1983 by The All Japan Coffee Association. However in the United States “National Coffee Day” was publicly announced in 2005.

The theme for 2018 Internal Coffee Day is “Women in Coffee.” It focuses empowering the women in the coffee sector and working towards equality for them and for everyone.

It was on October 1, in Milan that this day began to be celebrated as the Coffee Day by the International Coffee Organization. The day not just promotes the love for coffee but also promotes fair trade coffee and spreads awareness about the plight of coffee growers.

In India, Chikmagalur, Bengaluru is called the Land of Coffee. It is more a drink of India than India. Every morning coffee is prepared traditionally using a traditional filter. In India, it is celebrated by launching special discounts and schemes for coffee lovers and organizing fun events to enjoy coffee. E-Cards for Coffee day are also available now.

The saga of Indian coffee began in 1600 AD with of ‘Seven seeds’ of ‘Mocha’ by the legendary holy saint Baba Budan in his courtyard in Karnataka. These were a beauty to watch and remained a curiosity for others. In the 18th the commercial plantations of coffee started in the South terrains.

Since then the coffee industry has grown in India.

Coffee in India is cultivated on the Western and Eastern Ghats under a thick canopy of natural shade.  It is also one of the 25 biodiversity hotspots of the world. Coffee is also responsible for the socio-economic development in the remote, hilly areas.

Though South Indians have enjoyed coffee from the very primitive times, for a long time India was a tea drinking nation but it was in 2001 that coffee houses like Café Coffee Day and Barista opened up and since then it seems like Indians have enjoyed the taste of this new delicacy.

National Coffee Day is a celebration for not just the South India but even the North Indians celebrate this day. There are coffee houses in almost every city the country now that organize photography competition, coffee brewing games, coffee drinking games on this day.

The Coffee Board of India will be organizing the International Foodtech India event from 27th to 29th September in Mumbai. It will be a food and beverage event. It will also be a way to celebrate the National Coffee Day.

Since the theme is so interesting and empowering, it will be amazing to see how the people across the world celebrate it this year.