Vikram has been one of the most-awaited films from the Tamil film industry and this film, finally hit the screens today winning the hearts of fans across the world. Starring Kamal Haasan, Vijay Sethupathi and Fahadh Faasil in lead roles and Suriya Sivakumar in a pivotal role, this film is directed by Lokesh Kanagaraj. What Lokesh made is just ‘wow’. A Kamal Haasan’s film is back to the theatres after three and a half years and thanks to Lokesh for bringing him back in the most spectacular way. Here is our review:

Vikram actually begins where Karthi’s Kaithi ended. After many months of drug racket busts by the police of Tamil Nadu, two huge containers of drugs go missing in Chennai. Much before the police get caught of it, it is important for the local gangs in Chennai to retrieve it. To make sure it reaches him, Rolex, the mafia king, played by Suriya, pays his gang. In between of all this, a group of masked men are on a killing spree where they are killing a few high ranking officers in the city. Prapanchan, an official (Kalidas Jayaram) from the narcotics bureau control was also killed. 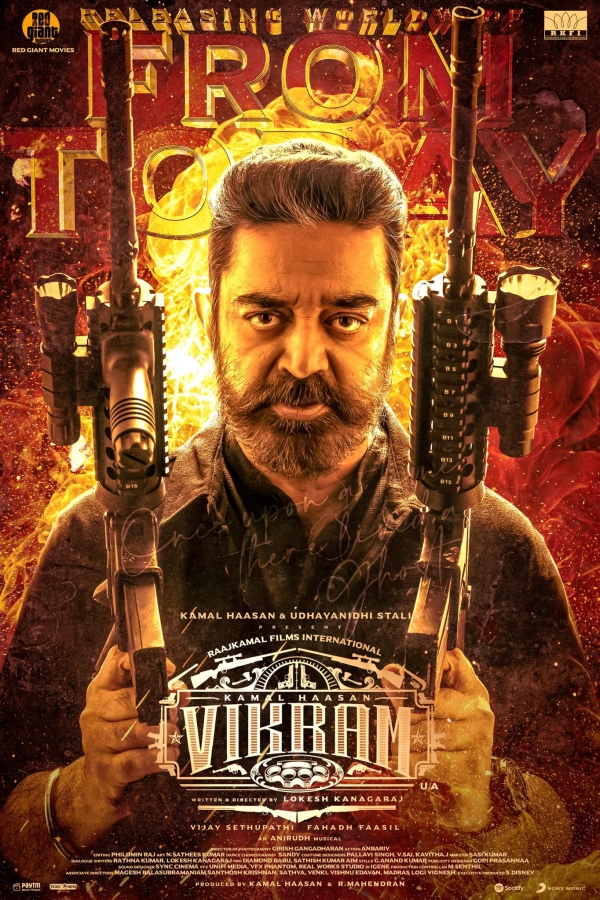 Karnan (Kamal Haasan) is out on a mission to take revenge when he comes to know that his son is one of the victims of the gang. This starts as an act of revenge and ends up becoming a mission that is led by Karnan who is a lot later introduced as Vikram. This character is the same one essayed by Kamal in a film called Vikram that was released in 1986. Police Chief Jose (Chemban Vinod) brings a team of officers in black ops and this team is headed by Amar (Fahadh Faasil) and he starts digging into the life of Karnan. Also, the chief suspect behind all this crime is Sandhanam (Vijay Sethupathi) who is a fearsome drug lord and is in search of that shipment which can make him a king of the mafia. To our surprise, a lot is happening in the city and the cops are set to solve it.

The first half of the film is at its best. Kamal Haasan is a visual delight in this action thriller. Watching him on the screen after a long time is such an exciting aspect to the audience and his fans as well. Vijay Sethupathi seems to be taking off from where he left the things in Master. He actually plays a ruthless villain and he nailed the character. He was fearsome in almost every scene. Fahadh Faasil and his acting skills need no introduction. All these three actors just nailed their performances offering their fans a terrific action film.

Lokesh Kanagaraj is transforming Tamil cinema in the best way possible and he deserves the credit for this amazing adrenaline rush he has given to the fans. There are three monster fight blocks in the film and they are the action sequences fans have been waiting to watch in the theatres. Anirudh has set a benchmark yet again with his music. The background score composed by him elevates every scene in Vikram. On the whole, this film is worth your time and money!

Also Read - Top 10 Most Expensive Clothing Brands in the World rahul vaidya and disha parmar are among the most popular couples in the entertainment industry.

top 10 most beautiful girl in india: india is the only country where you can see people of all races, religions, and ethnicities coexist peacefully.