The Allu Arjun and Rashmika Mandanna starrer Pushpa: The Rise is glorifying in theaters breaking all records. The team is also on cloud nine with a massive hit of Rs 200 crore and has hosted a private party. Yesterday, the director's party was held and the entire team including Allu Ariun, Rashmika Mandanna, Anasuya Bhardwaj, Suniel, and others, along with Sandeep Reddy Vanga and Allu Aravind attended as guests.

In the end, Pushpa Raj and Srivalli stole the show with their great looks. While AA sported a laid-back look, Rashmika made sure to turn heads in a red dress. Allu Arjun once again proved to be the stylish Tollywood icon, as she wore a black hoodie with her favorite dialogue "Thaggede Le" printed on it with sweatpants. His sneakers, rugged beard, and a bright smile made his outfit more elegant.

Well, arriving at Rashmika Mandana, National Crush of India took on the show in a tight red velvet midi dress with black heels. She completed the party look with natural makeup and a cute pair of earrings. 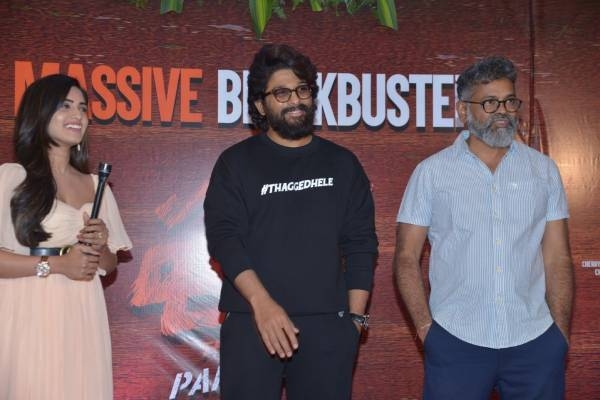 Pushpa: The Rise is Allu Arjun's 2nd  and 10th South Indian film to exceed rupees. 200 crore mark. The film is directed by Sukumar and also stars Fahadh Faasil and Dhananjaya in the lead roles. Samantha appeared on a special called "Oo Antava Oo Oo Antava", which was a huge success.

The movie was produced on a big budget by Mythri Movie Makers and Muttamsetty Media. The second part of the film will be screened in theaters in 2022.