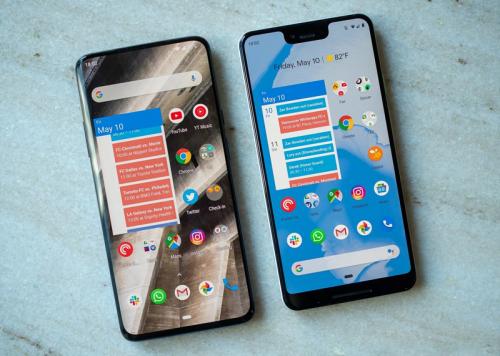 Here is the first official look of Google Pixel 4

The most awaited Google Pixel 4 flagship phone won’t debut until October, but it’s look has been revealed officially. The picture of upcoming Google Pixel 4 is tweeted by Google to make the confirmation of the newly designed phone before the launch date. The design of Pixel 4 is quite different from earlier versions of Google phones. Those phones had a glass back with dual tone finishing. Gesture controls would also be available in this phone with amazing real tone display feature just like Apple.

The image shown by Google of the upcoming Google Pixel 4 has a camera bump in square shape. There are an LED flash and two sensors at the back of the phone, and there is the third sensor on the dual camera top setup. It can be useful when someone wants to take full angle shorts and portraits. There is a little dot on the right side of the camera, and this would be a noise cancelling microphone.

The new phone will have a grey or white power button on the side. There is the absence of a rear fingerprint sensor, but it might be possible that the fingerprint sensor is given on the front side. The phone might also have the facial recognition feature, and the overall design of this updated phone looks quite similar to the earlier versions.

After revealing the updated phone of Pixel, Google has decided to put leaks and speculations on rest for some time. The new pixel phone would come up with an updated generation of Google assistant. The new model will have a fast response to the hardware as compared to the existing model, which can send commands to any remote server on the internet. The previous year, there were a lot of rumours and leaks which revealed a lot of information about Pixel 3 before the launch. Videos, screenshots, and renders were seen online revealing the phone, and the same case was with the Pixel 3a smartphone which was rumoured to be Pixel 3 Lite before the launch. This year Google will launch two phones, and another one is Pixel 4 XL. Both of these phones will be based on Soli Project, which was revealed in 2015. The gesture controls would be available on the new phone.

The upcoming Google Pixel 4 will provide a hands-free feature to the users with its aware sensor presence. The slide and skip media gestures might be added in the phone. There will be some more gesture controls which will make the lives of users easier than before. In the beginning, Project Soli was for wearables, but the FCC approval confirmed that Google is permitted to bring its Soli project technology in the new phones. This phone can bring a transformation in the choice of people who buy iPhones. There might be several customers who turn towards Google Pixel 4.

You Might Also Like: How to set up and use Google Voice on your computer or mobile device

Earlier, Samsung provided air gesture, and air view gestures on flagship phones to provide a hands-free option for the users while using the in-built camera. In February 2019, LG brought G8 ThinQ, which features air motion gesture and use ToF (Time of flight) sensor to control gestures. Google has different and unique aims as compared to its earlier models. The dedicated integration will enable the gesture controlling in the new phone. The developers also claim that Pixel 4 will be having True tone display features like Apple. You need to wait for some time if you want to know about all the features of the phone because Google has ensured that there isn’t any leak of pictures and videos of the phone until its official launch.

The official image has at least given a little bit of information to the phone users. It is possible that this phone would compete iPhone flagships and Samsung Galaxy S-series phones. If you are planning to get a new phone, then you should wait for some time until the new Google Pixel 4 arrives in the market. The exact launch date isn’t revealed by Google, but it will be in October or November 2019. The phone has fantastic looks, and the features aren’t fully known until now. To stay updated about the Google Pixel 4 features, you should know about the latest by Google about the phones.