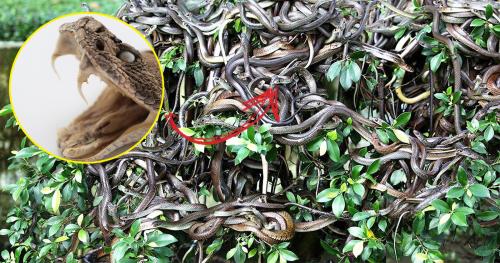 Creepy Snake Island Of Brazil Off Limits To Humans

Brazil remains one of the best destinations for an escape in the unique wild part of nature. There are a lot of islands surrounding Brazil that offers the perfect spot for an exciting vacation. It is possible that you visited various exciting places around the world and if you are an adventure lover, you will like to visit many more. However, your quest for adventure can get serious threat if you come to know about an island in Brazil infested with the most venomous snakes. 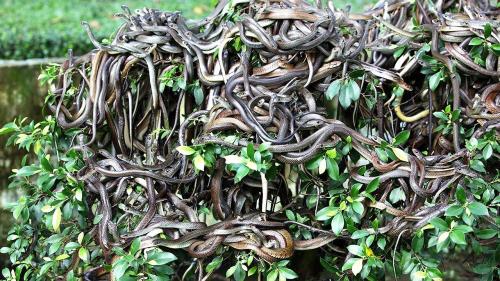 A brief about the snake island:

This Island is present around 90 miles away from the beautiful coast of Sao Paolo, and the human developers do not touch it. This island is not known to many people, and people do not live here for the hissing and slithering presence of the deadly venomous snakes all around. The name of the island is Ilha da Queimada Grande, and it is also popularly known by the name “Snake Island.” One of the most venomous snakes in the world, golden lancehead pit viper, is present in this island in abundance.

One bite from such snakes can cause sure death within an hour, and this is the reason why people of Brazil call it a Snake Island in Brazil. The snakes feed on the migratory birds that use this island as a resting point. The birds can offer enough food to the snakes to maintain its density by a remarkably high number. According to the latest estimates, there are around one to five snakes in every square meter of the island. The forecast also reveals that there are about 4000 snakes present in the island and the majority of these snakes are the pit viper snakes.

How such venomous snakes came to the island?

It is said that around 11,000 years ago, this snake island got separated from the mainland due to a rise in the sea levels. Since there was no food for the snakes, these snakes evolved into a venomous species and killed the prey instantly with the deadly poison. Stories also go around about the death of lighthouse keeper and family from a snake bite, while staying in the island. If you want to Discover Snake Island in more details, you should know about the island from the following discussions.

More about the snake island:

The moniker snake island is aptly made for the deadly reputation the island has earned with the highly populated venomous snakes present in it. Some brave souls lived on the island between 1909 and 1920 to operate the lighthouse till the blood-thirsty snakes made living impossible here.

Travelling to the island is banned by the Brazilian Government, and in case anybody wishing to visit the island, special permission from the Brazilian Navy need to be taken. You will have to travel to Itanhaem or Peruibe which is around 1.5 to 2.0 hours journey from Sao Paolo. Further, you have to convince local people to take you in their boats and carry to the island. However, for many years, no local people have visited this deadly island as it is illegal and dangerous.

Why even local people dread to go to this island?

There are some reasons for this fear of going to the island, and a few are here for your interest:

There is no human resident available anymore on the island, and this island is strictly prohibited for any visitor. This ban benefits mutually the snakes, as well as the people as the former is super endangered species and the latter, can be protected from unfortunate sudden demise. Carefully screened and vetted scientist and the Brazilian Navy are only permitted to access the island.

Though there is a huge risk of going to Snake Island, this island is undoubtedly one of the best naturally beautiful islands. It boasts of a rich and varied terrain, and there is some magnificent rainforest here too. If this place were not infested with the life-threatening venomous snakes, it would be of most cherished vacations for the riches.

It is almost sure that the venom of the poisonous snakes will be sufficient to kill an average person. Some interesting finding of the snake bite reveals that the affected part of the sting can have flesh blistering horribly. There can be liver failure, muscle neurosis, and brain haemorrhages and frequent vomiting when you are unlucky to get a bite from these deadly snakes.

In spite of all these dreaded scenarios of the island, it is still important to explore such an island and know more. Mainly for the fearless researchers, this island needs to be investigated for ensuring the longtime safety of this endangered species but also for medical benefits