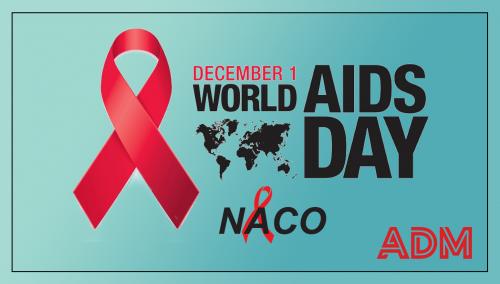 World AIDS Day or World AIDS Awareness day takes place on the 1st December every year. It’s an opportunity for people across the globe to unite in the fight against HIV, to show support for people suffering from HIV, and to memorize those who have died from an AIDS-related illness. Founded in 1988, World AIDS Day was also the first ever global health day.

Some facts about AIDS in India-

In 2017, HIV frequency among adults (aged 15-49) was an estimated 0.2%. This figure is in control when compared to most other middle-income countries but because of India's vast population (1.3 billion this equates to 2.1 million people living with HIV.

In 2017, 79% of people living with HIV were conscious of their status, of which 56% were on antiretroviral treatment (ART). The HIV epidemic in India is driven by sexual transmission, which is the reason for 86% of new infections in 2017/2018. The three states with the highest HIV occurrence are Manipur, Mizoram and Nagaland.

Researchers Mariam Claeson and Ashok Alexander mentioned in their research article ‘Tackling HIV in India: Priority Setting and Programming’ that there are no such “innovations” in India's approach towards the prevention of HIV  but there is an approach of sound policy-making, investment in good data to make informed decisions, analysis of the data to establish the epidemic drivers, and comprehensive plans and budgets for pacing up known involvements directed at those populations with attitudes that are responsible for the most exposure to HIV. The world has much to learn from India's approach.

NACO is the body accountable for formulating policy and implementing programmes for the prevention and control of the HIV epidemic in India.

The most recent programme, NACP-IV (2012-2017, extended to 2018), aims at reducing the annual new HIV infections by 50% through the stipulation of comprehensive HIV treatment, education, care and support for the public and help the key affected groups and those at high risk of HIV transmission.

The most important agenda of the NACP-IV is the prevention of new HIV infections by reaching 80% of majorly affected populations with targeted interventions.  For example, targeting interventions for female sex workers and their male clients shall help reduce the risk of clients transmitting HIV to their regular sexual partners.

A key reason for HIV is unprotected sex among key populations and their clients, partners and spouses. in the northern and northeast states injecting drug is increasing the number of HIV patients.

Key population groups have been prioritized in the national AIDS response since its inception in 1992. There has been a recent decline in the cases of HIV amongst sex workers.

Other steps taken by NACO for spreading awareness against HIV include

There are several myths associated with the disease that make it a taboo in India, although this is a very wrong perception. One of the biggest existing myths is in context with the transmission of the HIV/ AIDS virus. HIV/AIDS can never be transmitted by casually coming in contact with an HIV positive person through gestures like shaking hands, hugging, kissing, sneezing, touching, using the same toilet, sharing clothes and towels, sharing the same cutlery or mouth-to-mouth resuscitation.

One must know that HIV/ AIDS can be diagnosed with the help of a blood test. And if the blood test for HIV comes out to be positive, the patient is advised to do follow up for the blood tests to be sure that the person has the disease. If that is the case, the person is suggested to further undergo several other tests to see how far the disease has progressed. This will help in the apt treatment and understanding of the disease. In circumstances where an individual comes in contact with an infected person, it is advised that he should take up the tests at the earliest.

Despite the excessive awareness programs run by NGOs and government there are still certain sections of the society that believe in these myths and abandon those suffering from HIV. The picture has changed over the years in a positive way and with the we hope, India gains complete insight about this disease and fight stronger than ever against it.