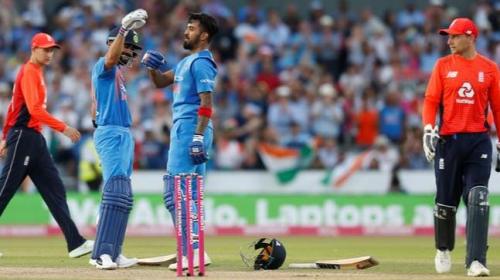 KL Rahul smashed century and Kuldeep Yadav picked up his maiden T20 International fifer as India outclassed England by eight wickets in the first T20I and go 1-0 up in the three-match series at the Manchester on Tuesday.

Rahul played 54-ball 101 runs, with 10 fours and five sixes to anchor India's run chase that saw him forge a masterly 123-run second wicket stand with opener Rohit Sharma (32 off 30).
Chasing 160, India quickly overcame the early loss of opener Shikhar Dhawan (4) as the right-handed duo of Rahul and Rohit helped the visitors race to 50 in the first five overs.

India captain Virat Kohli explained his decision to promote Rahul ahead of him in the batting line-up and his plans going forward.

Kuldeep Yadav became the third Indian after Yuzvendra Chahal and Kumar to take a five-wicket haul in T20 Internationals during the first match against England at Manchester on Tuesday.