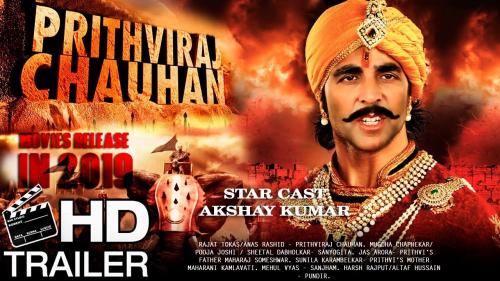 The year 2020 is going to prove lucky for Khiladiyon ke khiladi Akshay Kumar. He will come with four releases in the year 2020 which are lined up one after another. As per sources, after Sooryavanshi, Laxmmi Bomb and Bachchan Panday, Akshay Kumar will be seen in Maharaj Prithviraj Chauhan's biopic and historical film "Prithviraj'. The film is based on the life and heroism of the fearless and mighty King of the Chahamana dynasty. This film is directed by Chandraprakash Dwivedi.

On his 52nd birthday this September, Akshay Kumar made the big announcement about Prithviraj. Sharing the teaser, he tweeted, "Elated to share about my 1st historical film on my birthday! Humbled to have the opportunity to play a hero I look up to for his valor & values- Samrat Prithviraj Chauhan in one of my biggest films #Prithviraj. Producer @yrf,director #DrChandraprakashDwivedi, releasing Diwali 2020 (sic)"

In this film, a new and fresh face from the beauty world will be seen. Miss World 2017, Manushi Chhillar will be playing the role of princess Sanyogita. This news took the internet with a storm when the Manushi confirmed the news.

Pooja and hawan of Prithviraj

Recently, both the actors Manushi Chhillar and Akshay Kumar seen at the muhurat pooja and Hawan of the movie. They took to their social media handles to share glimpses from the auspicious affair and looks like they're ready for their new venture.

Recently, Akshay Kumar shared a video of Prithviraj from his Twitter handle. in this video, the " Prithviraj" team was performing a hawan. Sharing the video, Akshay Kumar wrote, "Here's to auspicious beginnings?? Stepping into the world of #Prithviraj. In theatres #Diwali2020! Need your love and best wishes as always. @ManushiChhillar #DrChandraprakashDwivedi @yrf".

As per Prithviraj director Dr Chandraprakash Dwivedi, he said, "We auditioned a lot of young, fresh faces for the role because we were looking for a stunningly gorgeous Indian heroine. While Sanyogita was an incredibly beautiful person, she was also a strong, confident girl. We were looking to find someone who could match the magnetic persona of Sanyogita and we found that in Manushi."

On being chosen for the film, Manushi said, "It is a huge honour to have been chosen by a production house like Yash Raj Films as their heroine! I'm thoroughly happy and thrilled about the learnings that I will have through this journey. My life, so far, has been a fairy tale. From becoming Miss India and then Miss World to now getting such a big project as my debut film, it's like a new, exciting chapter of my life."

Talking about her role in the film, Manushi said, "It is a huge responsibility to play princess Sanyogita. She was a powerful personality and she stood up for what is right and took the most important decisions of her life by herself. Her life is an extremely important chapter in Indian history and I will try my best to play her as accurately as possible."

The film is expected to hit the screens on Diwali 2020 facing a Box Office clash with Kangana Ranaut starrer Dhaakad.