Home Scinece-Tech Asus ROG Phone 2 with 120Hz Display will be optimized for games! 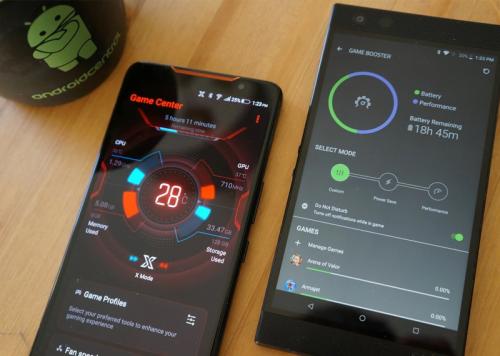 Asus ROG Phone 2 with 120Hz Display will be optimized for games!

Asus is one of the famous mobile brands which are loved by the customers a lot. The current versions of Asus contain several amazing features and Asus ROG Phone 2 is going to bring several new features. It has been revealed that this phone will come with 120 Hz of the display. The information has been revealed by the Asus Company through Weibo poster. This poster depicted the partnership of Asus with ‘Under the One man’ Chinese game. This game is based on a comic franchise which is published by the company, Tencent Games. The ROG team of Asus has confirmed that this phone will be released in July and they have also revealed about the partnership for content and devices in the future with Tencent Games. The news of Asus ROG Phone 2 to ship with a 120Hz display is great news for smartphone lovers.

Some time ago, it was revealed that Asus ROG Phone is going to launch in July while collaboration between Tencent and Asus was announced a long time ago. The sales of the company can be driven by the addition of amazing Tencent games. Black Shark 2 is another gaming phone available in the market, and it would be amazing to see the competition between the two. In the year 2018, the first Asus ROG mobile phone was launched, and the battery life and performance of the phone was quite impressive. The interface of the phone wasn’t much appealing, but it carried an excellent gaming experience.

On the release time, the price of Asus ROG Phone will be only Rs.69.999/- and the phone will be having 120Hz of amazing display and it would be ideal for playing Under the one-man Chinese game. If someone loves to play fighting games, then this phone would be perfect as it will provide a refreshing fighting experience for you. Many more famous games will be added to the phone and the collaboration between the two companies will bring several games which will be specially optimized for this phone. There are huge chances that this phone would contain Snapdragon 855 SoC with better performance for the gaming freaks. The company discloses not many details about the phone, but the significant change is the addition of Tencent games on the phone along with the better processor. So, you can look forward to finding out new features of the phone after its release.

The earlier version of Asus ROG Phone was quite impressive, but it had some issues which prevented Android users from buying it. They thought the phone was quite expensive when compared to the features. When the other gaming phones available in the market, the competition automatically enhances. That’s why one should wait for this phone to release in the market. The processor of this new version is going to be reliable. Most of the android users face the problem of the frozen phone while they play a game.

When you begin playing fighting games which take a lot of space, then it might become challenging to keep Android in good condition. The processor of the phone should be strong enough to hold heavy gaming. The Asus ROG Phone 2 to ship with a 120Hz Display will bring surprise for the game lovers. The battery backup of the previous model was also amazing, but there might be some changes in the new model to provide a better experience to the users. The camera and other specifications of the phone aren’t explained yet by the company, but it would be somewhat like the previous model. The significant changes will be made in the processor and gaming capacity of the phone.

The tie-up of the Asus Company with Tencent games would definitely let the users enjoy several games with a better experience. It might be possible that the users would get some games for free and nothing can be better for the game lovers than finding amazing fighting games on their phone for free. If you were planning to purchase a new phone, then it is better that you wait for some time till Asus release its brand new phone with amazing features. People who are a gaming freak would love to use this mobile phone. The features of the phone would justify its price, and that’s why the sale of this phone would definitely rise with its release. As per the news, Optimized Games said to be in the Pipeline with the introduction of this new phone.