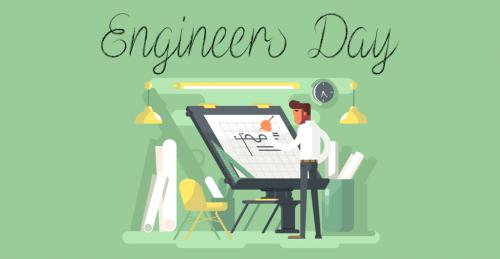 The theme of Engineers Day for 2018 is “Engineering Challenges for Knowledge Era”.

This year will be the 50th anniversary of the Engineers Day in India. In India Engineer’s Day is a day on which the greatest Indian Engineer Sir Mokshagundam Visvesvaraya was born. And this year we will celebrate the 157th birth anniversary of M. He was also conferred with the Bharat Ratna by the Indian government in the year 1955 for his outstanding contribution in the field of engineering.

He was born on 15 1861, in Muddenahalli near Chikkaballapur and grew up to become a civil engineer. But he was no ordinary engineer but a nation builder. He dedicated his life the growth of the country.

He was not only a prolific engineer but also an efficient administrator. He proved his successful administration as the Diwan of Mysore from 1912 to 1918 was the chief engineer for the Krishna Raja Sagara Dam in Mysore on the Kaveri River. Shri M. Visvesvaraya was not just responsible for its construction but he was also instrumental in formulating the concept of the dam. He was also the chief designer of the flood protection system developed for the city of Hyderabad. He had a vision and got recognition for developing a system that could save the Visakhapatnam port from sea erosion. He worked on several hydro projects and gave his insight in the construction of many dams across the country.

Shri Visvesvaraya was also known as the “Father of Modern Mysore State” as it was during his tenure that a lot of eminent institutions laid their founding stones. He was also conferred with the honorary title of ‘Sir’ by King George V who was the commander of the British Indian Empire. He was also known internationally and was a member of the London Institution of Civil Engineers.

This day is celebrated in different ways in different parts of the country. All the engineering schools, colleges and government organizations celebrate this day in their own way. The day an eminent and renowned engineer and aims to create many more engineers like him. Exhibitions, debates, seminars and workshops are organized on the day in various engineering institutions and offices across the country. The day is celebrated to highlight the contribution of every engineer because being an engineer is no easy job. Their contribution building a nation is immense and must never go unacknowledged. Today, India is progressing at a remarkable pace and a huge credit goes to the engineers of the country.