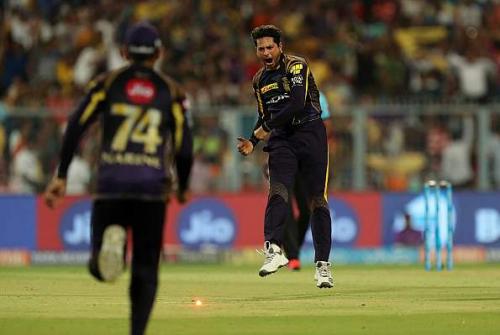 In the first 12 games of IPL 2018, Kolkata Knight Riders had played the perfect game with the ball just once - against Rajasthan Royals in Jaipur.

On Tuesday (May 15), KKR managed to do a double over RR as they polished off 142 runs with six wickets in hand in 18 overs.

KKR's revival was plotted by one man - Kuldeep Yadav. Andre Russell, Sunil Narine and Prasidh Krishna played their parts too but it was Kuldeep who turned the game. Kuldeep's 4 for 20 on the night were not only his best figures in IPL but also the best figures by a left-arm wrist spinner in the history of the tournament.

Dinesh Karthik had acknowledged the fact that Kuldeep gives them control in the middle overs and his lean run had hit the bowling plans pretty severely.

"If he bowls a bad ball, it is usually a fuller ball. He hardly bowls a short delivery. That kind of consistency for a wrist spinner is a massive quality to have,"

It was all the Kuldeep show. He had Ajinkya Rahane bowled in the eighth over and had Jos Buttler caught at short third man in the 10th over  with both batsmen falling to the reverse sweep.