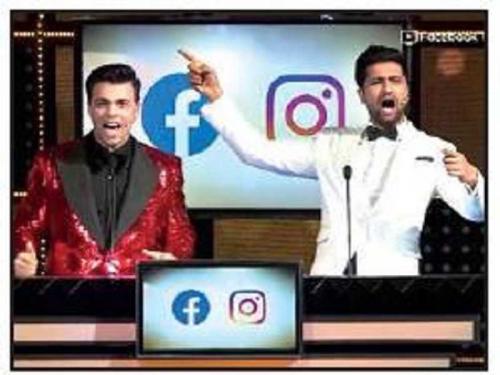 Bollywood’s most celebrated event, the Filmfare Awards, was this year taken to Facebook and Instagram by Facebook and Worldwide Media, India’s leading lifestyle and entertainment content company, making the viewing experience interactive for fans across the globe.

For the first time, the awards show was simultaneously telecast on Facebook and television. And there were more people around the world who also got red carpet highlights, backstage footage and special moments – all exclusively on Facebook and Instagram.
Viewers virtually joined the presenters, nominees and the stars for an unforgettable experience on Filmfare’s official page. Things got even more exciting when popular creators like Teen Tigada (Sameeksha, Vishal, Bhavin) and Kritika and Deeksha Khurana (The Khurana Sisters), set the red carpet on fire with their fun video with Bollywood stars, raking in over 10 million views within the first 24 hours, while fans from everywhere generated more than 240K interactions from across the globe. With 17 million views and still counting for the recently-held awards show, Filmfare fever continues on Facebook and Instagram.

“Films are a cultural phenomenon in India and bring us together. No wonder some of the vibrant communities and conversations on Facebook and Instagram are around films! Our partnership with Filmfare is really exciting as it gives us a chance to bring some really fun and exclusive videos and photos for people on our platforms,” said Manish Chopra, director, and head of partnerships, Facebook India.

Speaking about WWM and Facebook’s strategic partnership, Deepak Lamba, CEO, Worldwide Media, said, “While Filmfare Awards has always maintained its market leadership in terms of massive reach via TV, digital and the TOI group’s extensive coverage, this was for the first time that we connected with our audiences in a never-before manner. Facebook aided us in building a large community of Bollywood buffs who would not only engage with the content but also with each other at a matching interest level.”

There’s more to follow this year. The glitz and glamour, #FilmfareOnFB, will continue to entice movie buffs as they will get to relive iconic Filmfare moments from previous years on the official “All Things Filmfare” group.

What’s more, going forward, there will be year-round Filmfare magic with the upcoming editions of Filmfare awards in South, Marathi, Punjabi, East and the Filmfare Glamour & Style Awards.