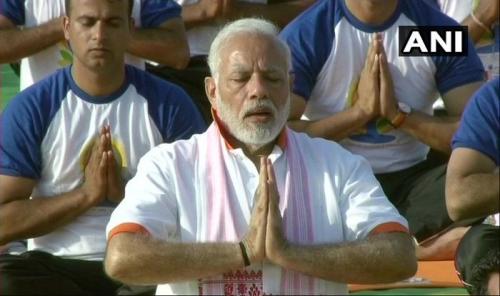 India’s gift to the world: Yoga

A proud occasion for Indians across 170 countries, today is the International Yoga Day which is India’s gift to the world. Yoga is a mental, physical and spiritual practice that brings about a of the mind and body with . In 2014, India introduced the draft resolution in UNGA suggesting June 21 to be proclaimed an International Day of Yoga. On 21 June 2015, the UN declared it as the first International Day of yoga after a record 175 countries endorsed the resolution which noted the importance of individuals making better choices and following lifestyle patterns for good health.

The World Health Organization recently stated that 61% of all deaths in India are due to diseases which include cancer, cardiovascular diseases, chronic respiratory disease and diabetes. Yoga is a holistic approach to wellbeing and has proved to be useful for all-from children to youth and elderly. Various illnesses can be treated through yoga. It advocates the purity of mine, speech, acceptance of others, purity of the body, , , perseverance and the contemplation of the Supreme one.

This is a time when lifestyle diseases are posing a big threat to the health of the people, yoga is a vehicle to transform the body and mind into a healthy machine. There are yoga established across the world. Yoga and meditation can develop a sense of calmness of mind which can help reduce the number of suicides in the world. There have been various novel variants in yoga which include beer yoga, dog yoga and nude yoga. Over 180 countries are celebrating the International Yoga Day today. Prime Minister Narendra Modi earlier said today that yoga is the biggest unifying force in the world. India has a soft power that can change the world