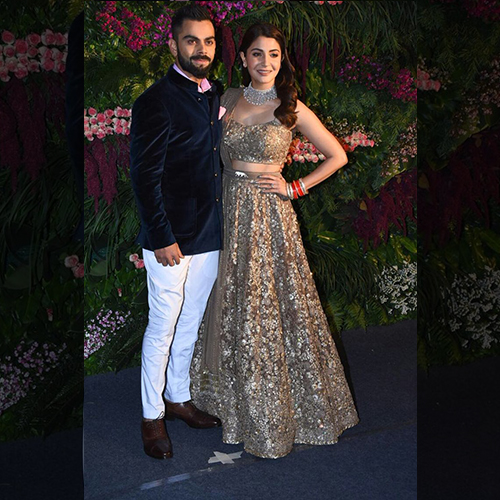 There seems to be no getting over the Virushka fever. Since their wedding in Tuscany, Italy on December 11 to their reception in Mumbai on December 12, everything seems like a fairy tale.

The rumors about their wedding had already started in December but both Virat and Anushka denied it, it was until a few days later when both the stars confirmed the news by posting a picture with a confirmation caption on Twitter. The couple then came to Delhi for their reception where Prime Minister Narendra Modi served as a primary guest. After their lavish Delhi reception, the couple threw an extravagant bash in Mumbai.

Both Virat and Anushka wore Sabyasachi outfits during this occasion as well. Sharma wanted to channelise old glamour into her look. So, the designer decided to add some modern touch to it with cut organza flowers, textured sequins and beaten silver threads in an ethereal smoky grey lehenga.

According to the designer, as shared on his Instagram, her look was accessorised with “a necklace and earrings hand crafted with rose cut diamonds, solitaires and briolettes from the Sabyasachi fine jewelry collection”.

Meanwhile, Kohli looked like a royal in an Indigo velvet navy blue bandhgala and an ivory Jodhpuri trouser from Raghavendra Rathore.

The reception took place at St Regis hotel in Lower Parel and the main function was held in the capacious Astor Ballroom which is on the 9th floor of the hotel and has a seating capacity of about 300 guests. To add to the charm there is a skyline in the background and has crystal chandeliers for the ceiling.