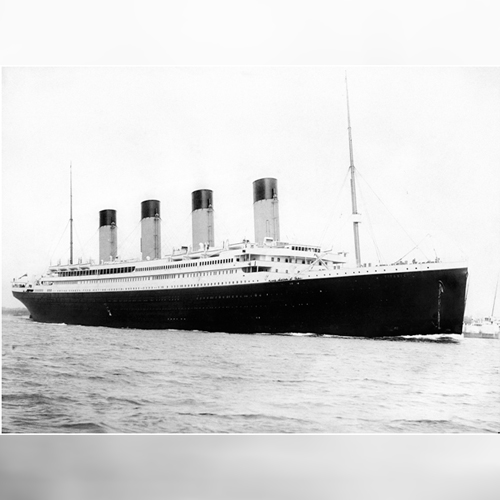 The RMS Titanic was the world's largest and the most celebrated passenger ship when it entered service.With the length of 882 feet 9 inches (269.06m) and maximum breadth of 92 feet 6 inches (28.19m) and a total height of 104 feet (32 m) from the base to top, Titanic was the worlds largest man-made moving object at the time.The design of the ship was lauded as "state-of-the-art". Equipped with electric watertight doors, latest radio communication technology, and many other futuristic facilities, the ship was termed as "Practically Unsinkable" at the time.

Titanic departed for its maiden voyage from Southampton, England on April 10, 1912, to New York City with an estimated 2,224 passengers and crew aboard the ship.

During the voyage, the ship received six warnings of icebergs but it kept sailing under a moonless clear sky on the calm ocean.On April 14 at 11:40 pm after 4 days of sailing into the Atlantic ocean, a lookout saw an iceberg coming immediately ahead of the great ship and rang the warning bell and alerted the bridge.The first officer ordered the ship to be turned sharply and engines to be stopped quickly but it was too late.The side of Titanic struck the iceberg and it created a series of holes below the waterline allowing water to seep in and five of the ultra-modern watertight compartments were breached and it soon was clear that the ship was doomed.It is said that the ship would not have sunk if it collided the iceberg head-on.

By the time Captain Edward Smith toured the damaged area with the builder of the ship Thomas Andrews, did a quick calculation and estimated that the great ship would sink within two hours but the great stubborn Titanic stayed afloat close to three hours, more than what Andrews had predicted.These historic hours became unforgettable and immortal in human history.

The Titanic broke in two parts at around 2:20 am on April 15, two hours and forty minutes after the ship hit the iceberg, nearly perpendicular and many of its beautiful lights still aglow, the great ship finally dove beneath the ocean surface.

About 710 survived with the help of lifeboats while at least 1500 passengers and crew members were engulfed in deadly cold water with the temperature of −2 °C.One in five would have died within two minutes and few would have survived longer than fifteen minutes.Almost all of them died of cardiac arrest or reactions to freezing water. 61 percent of the first class passengers survived while 24 percent of the third class passengers could be rescued.

The great captain of the ship Edward Smith also went down with the Titanic. His last words were: “Well boys, you've done your duty and done it well. I ask no more of you. I release you. You know the rule of the sea. It's every man for himself now, and God bless you.” His body was never discovered after the ship sank.

Musicians kept playing the music for 2 hours and 5 minutes as the ship sank.

Only 333 bodies were found, one in five of over 1500 victims.A pocket watch was recovered from an unknown victim which had stopped showing time at 2:28 am.

The ship had a total of 20 lifeboats which were enough to accommodate only 1,178 people barely half the number of the people on board or one-third of the total capacity the ship could carry.The survivors were rescued at around 4:00 am on April 15 by RMS Carpathia, arrived on the scene after the earlier distress calls of Titanic.

and about 600 km south-southeast off the cost of Newfoundland.Numerous expeditions tried to discover it for years but the wreck was finally located by a joint French-American expedition in 1985.Though over the years many impossible and impractical ideas have been put forward to raise the ship from its resting place it is nearly impossible to raise the wreck and the wreck is now protected by a UNESCO convention.